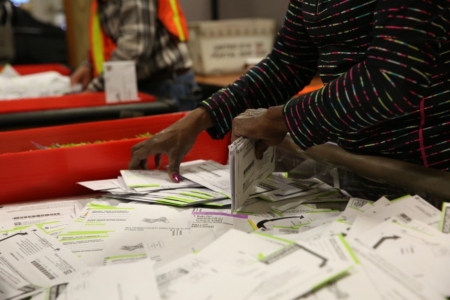 Vote By Mail Saves Oregon’s May Primary During Pandemic 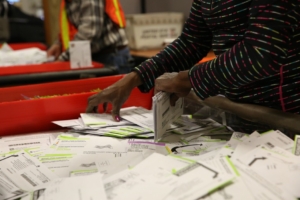 While some states are postponing their primary elections, Oregon Secretary of State Bev Clarno announced Thursday that the state’s May 19 primary will proceed as scheduled. “Because Oregon votes by mail we do not have to be concerned about social distancing issues at polling places that so many other states are struggling with,” Clarno’s office said in a statement.
At least five states have delayed primaries because of the coronavirus pandemic.  Those states — Georgia, Connecticut, Ohio, Louisiana and Kentucky — all rely heavily on Election Day voting at polling places. That means millions of would-be voters, as well as often elderly election workers, could face health risks and contribute to the spread of the disease.
A Multnomah County elections worker sorts ballots.
Nate Sjol/OPB
Marion County Clerk Bill Burgess, president of the association that represents local election officials in Oregon, said the epidemic will require changes in staffing and procedures to protect workers. He said this could slow the release of voting results on election night.
Mail voting is gaining a new flurry of support as a result of the pandemic. Sen. Ron Wyden, D-Oregon, who has pushed for years for the national adoption of all-mail balloting, is now sponsoring a bill requiring all voters to be offered the option to receive a ballot by mail in November. The measure would provide $500 million to states to help them do so.
Oregonians have until April 28 to register to vote. That’s the same deadline for changing their party registration. In Oregon, only registered Democrats or Republicans can vote in their respective primaries. For more information, go to Oregonvotes.org.
Share Tweet Share Pin
View Calendar